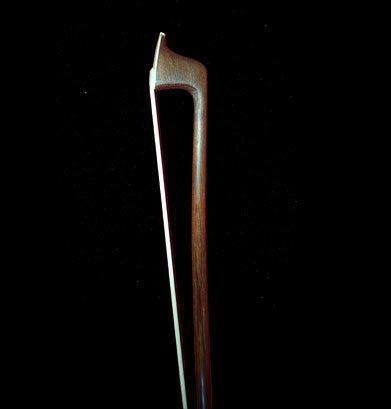 Mirecourt bow maker Eugène Cuniot, known as “Cuniot-Hury,” trained and worked with his father until his father’s death in 1884, when Cuniot-Hury took over the firm. Mirecourt was in the midst of tremendous growth as a center of the violin trade, and in particular the influence of Charles Nicolas Bazin held sway in bow making circles. Cuniot-Hury adopted a Bazin-style frog and button while retaining the more powerful head of his previous model.

As was the case with most successful Mirecourt firms in this period, demand overtook Cuniot-Hury’s output and he was forced to hire assistants around 1901. Interestingly, Cuniot-Hury chose not to impose strict guidelines on his workers’ choice of models or style of execution, and as a result the workshop’s bows are quite varied. The individual hand of Émile François Ouchard in particular is quite visible. The shop remained quite productive until Cuniot-Hury’s death in 1910 and afterward carried on under the direction of Ouchard. Some bows were supplied unbranded to other shops, while the others are stamped, “Cuniot-Hury” or “C.H.”