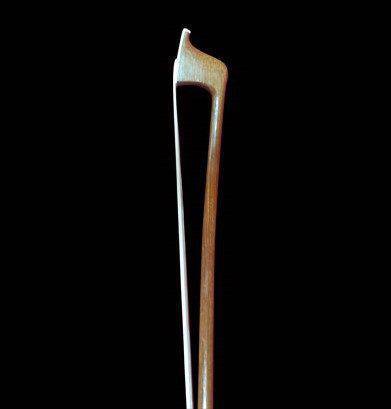 BowmakerÉmileAugusteOuchard first studied with his father Émile François at the Mirecourt shop of Cuniot-Hury and began to assist him around 1913. Father and son continued to work together after Émile Francois opened his own shop in 1923, andÉmileAuguste began to produce increasingly well-crafted work in collaboration with his father. After around 1930 his work matured, becoming rounder and more refined. He began to use Hill underslides in the mid-1930s.

In 1937 ÉmileAuguste took over his father’s firm, but the relationship became strained, and the following year he left to start his own firm in Paris, leaving his father in charge back in Mirecourt. At this point Ouchard ‘fils’ began to use a different brand, “E.A. Ouchard Paris.” The heads of his bows are of increasing thickness and strength, and this gradual evolution marks the golden period of his production, roughly 1940-1960.

Ouchard left for New York in 1946, where he worked independently until securing an exclusive position with the firm of William Lewis & Son in Chicago in 1948. He continued to work independently and in 1951 he returned to New York, where he worked for nine years before finally returning to Paris in 1960. He suffered a stroke shortly thereafter and unfortunately his work never again reached the same high standard. Ouchard used four stamps over the course of his career that reflect his whereabouts: “E.A. OuchardFils,” “E.A. Ouchard Paris,” “Émile A. Ouchard New York,” and “Émile A. Ouchard.”