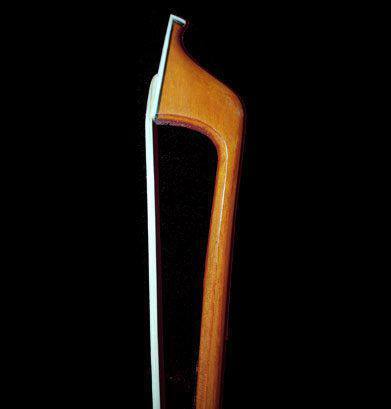 Cello Bow by Gunther A. Paulus

This fine hand crafted cello bow stamped “G.A.PAULUS***” on the shaft and bearing a brand upon the side of the frog. Its stick is octagonal pernumbuco of dark red-orange colour. Silver mounted ebony frog inlaid with Parisian eye. Three part silver adjuster inlaid with pearl eye.

Paulus-master bows have been produced by four generations. In 1923 the family-owned company was founded by Otto Paulus. He was born in 1891 in Markneukirchen, the home of music instrument manufacturing. Otto Paulus was fascinated by this tradition so he learned the profession of bow making from master Mönnig. Within six years he acquired a good and precious knowledge from August Rau. In the year 1923 he founded his own company and received his certification of master craftsman. He passed on his great experience and love for this profession to his son Johannes O. Paulus who learned bow making from Adolf C. Schuster in Markneukirchen and who graduated successfully from master school in 1950.

Johannes O. Paulus took over the workshop of his master and kept it running until he retired at 78, but nothing could hold him back from coming back to the workshop of his son Günter A. Paulus every now and then to see how things were going and to set his hand to something here and there.

At an early age, Günter A. Paulus discovered his love for the profession of bow making, he was led and qualified by his father. He received his master craftsman certificate in 1972 and kept on working in the workshop of his father until 1973, when he founded his own company.

Jens Paulus was born in 1970. He also learned the profession of a bow making and apprenticed to his father he graduated the examination for the master’s certificate in 1992. From January 2000 Günter A. Paulus and Jens Paulus both ran their workshop together.In 2006 Günter A. Paulus passed away. Jens Paulus continues the family business, now in its fourth generation.

Every bow gets adjusted strictly to the demands of the individual musician and to the requirements for the practical performance, by using highest perfection, artistic sensitivity and the right sense of personality.